The world is always ludicrous, isn't it? One person wants to talk, and the other person doesn't want to listen. It's always like that.
Chime Gen (given name pronounced chee-may) is one of the side characters in Dragon Raja. He is also a recruitable 6-Star Ally, with 5-Star alternate versions.

A pretty boy from the mountain. His eyes show both weakness and playfulness; he is a bit feminine and sensitive.

Chisei Gen and Chime Gen had a very good relationship as siblings in their childhood, and they had lived together in Ehime Prefecture. But when he was deemed to have an unstable bloodline, prone to becoming a Death Servitor, everything changed. Chisei was cultivated as the next leader of the Hydras while he was imprisoned as a sinner. Because of the inequality of status, Chime Gen started to develop jealousy and aversion to his brother.

Chisei would eventually leave him alone to do work assigned from the Hydras. With his brother and dependent gone, he began hearing the whispering rumors around town about his inferiority to Chisei no matter what he did, just as he always had.

Taking advantage of his weak mental state, he was deceived and used by Osho in Chisei's absence. Receiving the apparent power of a Death Servitor from him, Chime began to discreetly kill girls in town and keep them as specimens. Eventually, the Hydras had taken notice of his crimes and dispatched Chisei to eliminate the unidentified Death Servitor.

After coming back, the brothers reunited. However, when he heard about the mission, he suddenly asked his brother about what he would do if he had done something bad. When he received no reply, he resolved to continue his crimes.

At that time, there was the annual ritual taking place. But when Chisei arrived, he discovered Chime had destroyed it and killed the Witch (maiden). During the brothers' confrontation, he openly admitted it was him that Chisei was assigned to hunt. The event then led to his death by Chisei's blade.

Somehow surviving, he began his revenge on the Hydras and Chisei, even though he still admired Chisei deep down. To do this, he formally joined Osho as the second in the Devil Clan.

During this time period before his confrontation with the Hydras, he became famous as Ruri Kazuma, gaining many fans. He met Kogure Sakurai at some point as well, who would go on to serve Osho as another commander of the clan. It was also during this time that he began to plot the takedown of Osho, but had failed his first attempt, which why he enlists the help of Team Caesar later on.

After killing Chisei inside of the dream world with EX-Dream Beast as Ruri, the supposedly dead Osho reappears. The man gloats, and explains how he had planned everything from the start. One of the revelations is that Chime was never a Death Servitor. Instead, his actions were because of him awakening his darker split personality, Ruri Kazuma. Chime is killed soon after when Osho begins a ritual involving Erii.

Despite everything, he respected his brother a lot and considered him as his most important person. His goal was to reunite with him, as the good brothers they used to be.

"Brother! Brother! Are you here to see me?"

What seductive dance lies beyond the veil?

At Lv.1, Chime Gen swings his sword, dealing heavy MDMG to up to 10 enemies within 5m of the target, and dealing 50% increased damage vs. monsters. Targets hit deal reduced damage for 10 sec.

Amaterasu Mikoto and Tsukuyomi-no-Mikoto are my siblings, but they don't know it.

It´s cherry blossom season again. Every year when the cherry blossoms bloom, I come to Tokyo to see them and stop by to see my rather aloof brother too. I´ve come to realize that it´s always been like this between my brother and me. He´s always brilliant and magnificent up above, while I´m down low drawing attention from nobody, We´re clearly from the same mother, but he´s so superior to me. He´s a haughty emperor, while I´m a dirty ghost. I get upset just thinking about it. Brother, you said you´d always be by my side... So why don´t you come down to hell to visit me?

She who loves me

A girl likes me, this much I know. This is differnt from the usual idol adoration. Every time this girl looks at me, I feel like she´d do anything for me without hesitation. And that´s why I can give her Paradiso without worry. I heard that Cassell College sent some people to the Hydras and lately the Hydras have been resolute in cleaning up the Devil Clan.Does that mean that I´ll see you soon, dear brother? 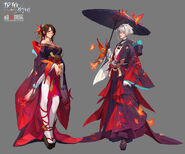 With Chisei Gen in Hydras.
Community content is available under CC-BY-SA unless otherwise noted.
Advertisement